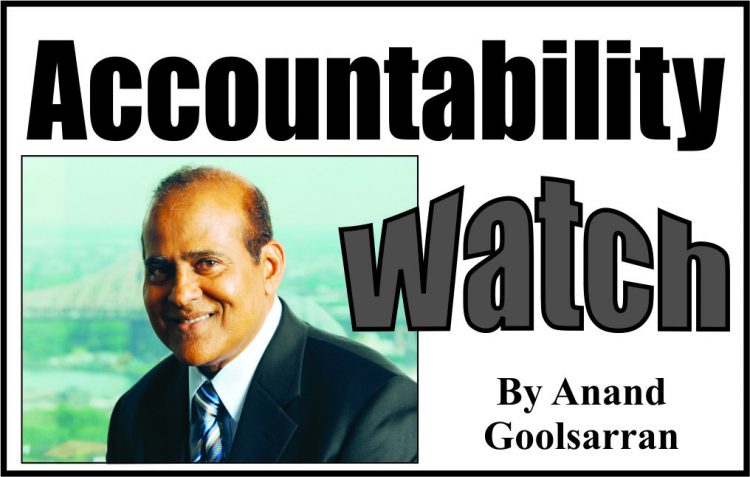 Last February, Global Witness issued a report entitled “SIGNED AWAY: How Exxon’s exploitative deal deprived Guyana of up to US$55 billion”. The report was extremely critical of the Production Sharing Agreement (PSA) between the Government of Guyana and ExxonMobil’s subsidiaries in relation to the Stabroek block. It also expressed concern at the ‘apparently suspicious circumstances’ surrounding the granting of two other licences relating to the Kaieteur and Canje blocks, portions of which were sold to Exxon within months of the issuing of the licences.

The key finding of Global Witness was that, based on an analysis carried out by OpenOil on its behalf, the deal was ‘an exceptionally bad one’, with Guyana standing to lose up to US$55 billion on the Stabroek block. Except for the quantification of the extent of the loss, this conclusion coincided with our previously stated view that ‘when one assesses the financial implications in terms of the net benefit to the country (i.e. royalty plus net share of profit oil minus the value of the exemption from various taxes), the inescapable conclusion is that the Agreement is overwhelmingly a one-sided affair’. Under the Agreement, Guyana receives two percent royalty and 50 percent share of profits after a deduction of up to 75 percent for expenses incurred by Exxon. Guyana’s share of revenue from Exxon’s petroleum operations is therefore 14.5 percent.

We had refrained from trying to estimate the dollar value of the revenue that would accrue to both the Government and Exxon for two main reasons. The first was that, given the volatility of oil prices, it would be difficult to predict such prices over the period of the PSA, as several assumptions will have to made that may or may not materialize. The second reason relates to the Paris Agreement that 196 countries had adopted in 2015. In that Agreement, the signatories committed to ‘holding the increase in the global average temperature rise to well below 2°C above pre-industrial levels and pursuing efforts to limit the temperature increase to 1.5°C above pre-industrial levels’. This is in recognition that such an approach would significantly reduce the adverse effects of climate change caused by global warming.

In order to pursue this goal, countries have set specific targets on the phasing out of the use of fossil fuels, the main contributor to global warming and the adverse effects of climate change; and intensifying efforts to switch to renewable sources of energy. For example, European Union countries have pledged to reduce greenhouse gas emissions by 40 percent by 2030. China is also expected to have 20 percent clean energy by 2030 while the United States pledged to have 40 percent clean energy by 2030. All of this will have a significant impact on the volume of production of crude oil and hence future oil prices.

In the case of Guyana, at the signing of the Agreement, former President David Granger had reaffirmed Guyana’s commitment to implement the Reducing Emissions from Deforestation and Forest Degradation (REDD) Plus Agreement. He further stated that Guyana would move closer towards a 100 percent renewable power supply by 2025, conditioned upon appropriate support and adequate resources, and that through these efforts, Guyana can contribute annually to reduced emissions equivalent of up to 48.7 million tons of carbon dioxide.

As indicated above, Global Watch was very critical of the PSA with Exxon and the financial implications for Guyana as well as the circumstances surrounding the granting of licences for the Kaieteur and Canje blocks. The report also discussed in detail: (i) the signature bonus of US$18 million which the previous Administration denied receiving until it was confronted with the evidence via the media; (ii) apparent conflicts of interest involving key government negotiators as well questions relating to ethical conduct in their dealings with Exxon; and (iii) the effects of Paris Agreement on Climate Change.

Global Witness made the following recommendations:

(a)          Renegotiate Exxon’s Stabroek oil license with a view to having a share of revenue that equates with international standards. In this regard, the Government should commission an independent evaluation of the amount involved;

(b)          Place moratorium on new drilling, considering issues relating to climate change and meagre amount of revenue that Guyana will receive from Exxon. The nine other licences granted should be cancelled and no new licences awarded;

(c)           Investigate the process by which the Stabroek license was negotiated, including whether an apparent conflict of interest prevented the officials involved from fully negotiating in the best interests of the country;

(d)          Adequately resource and ensure the independence of its anti-corruption agencies, including Guyana EITI and the State Assets Recovery Agency which was investigating the process by which the Kaieteur and Canje licenses were awarded.

Reaction from the Government

The Government had rejected the report, contending that it was ‘sensationalist, agenda-driven and extraordinarily speculative’; Global Witness presented no evidence of corruption and malpractice by government officials involved; and the timing of the report’s release appeared to have been to influence the outcome of next month’s general and regional elections. It also sought to clarify that the Agreement was influenced by the border controversy with Venezuela; the threat of military action by that country; and since 2013 the Venezuelan navy twice harassed oil survey ships operating in the disputed waters. Notwithstanding the Government’s explanation, Global Witness expressed the belief that the controversy was not an adequate justification of the ‘exploitative nature of Exxon’s Stabroek deal’.

Apart from the figure of US$55 billion that Global Witness has estimated that Guyana would lose, the report stated that Guyana would receive 52% of the revenue amounting to US$168 billion while Exxon would receive US$157 billion. This prompted a group of concerned individuals and civil society organisations, led by Attorney-at-law Melinda Janki, to write Global Witness requesting information as to the basis of arriving at the above figures. The group pointed out that according to the PSA, Exxon’s subsidiaries would deduct 75 percent of the revenues to recover their costs, and the remaining 25 percent would be shared equally between Exxon and the Government. Taking into account the two percent royalty that Guyana would be receiving, Guyana’s share should be 14.5 percent and not 52 percent as stated in the report.

Global Witness’s response was that the calculations were readily available but did not provide the information. Instead, it requested a meeting with the group to discuss the matter. The group, however, declined to have the meeting unless the details of the calculations were made available to it. Global Witness did not provide the information. As a result, the group called for the withdrawal of the report.

Last week, Global Witness announced that it was withdrawing its report on Guyana’s oil sector. In doing so, the international watchdog body stated that it is redirecting its efforts to the adverse effects of climate change:

The climate emergency is the greatest threat facing the world. If we are to prevent its worst  impacts we all must act now. For Global Witness  this has meant redirecting our efforts to fighting the main drivers of the climate crisis: deforestation, the extraction and burning of fossil fuels and the corporate capture and other abuses of power driving these destructive activities.

Global Witness has acknowledged that its report was not consistent with that focus and for this reason it has decided to remove it from its website and cease using it in its campaigning work. It also expressed regret at ‘any unintended negative consequences arising from the report, including its stifling of debate within Guyana around actions to address climate change’.

Global Witness further stated that as the destructive impacts of the climate crisis – flooding, desertification, famine – have become more acute, its work needs to change; and it is no longer enough for calls to be made for oil and gas businesses to operate in a more transparent and accountable manner. Accordingly, it acknowledged the need to work with others to achieve ‘a just and equitable phase out of fossil fuel extraction’; and to support the voices of activists around the work in their fight to save the planet from the devastating effects of climate change.

More importantly, Global Witness acknowledged that its revenue analysis assumed that the Paris Agreement would not be implemented. This has led to an overestimation of the amount of oil Guyana would likely produce and the value of that oil. Under its new organisational strategy, Global Witness indicated that it is advocating that greenhouse gases must be reduced by 50 percent in order to save the planet. It further stated that since the publication of its report, oil prices have dropped by more than a third, especially in view of the COVID-19 pandemic as well as efforts by countries to implement policies to restrict the use of fossil fuels in order to tackle climate change. Given these considerations, Global Witness has now indicated that ‘the prospects for sustainable income generation from new oil projects are increasingly questionable’.

Based on feedback from civil society representatives in Guyana, Global Witness concluded as follows:

Our report has made it harder for them to argue   the case for cessation of oil production in their  country. Global Witness’ decision to withdraw Signed Away is not an endorsement of the way Exxon or Guyanese officials negotiated the oil    licences awarded to the company. We stand by the integrity of the evidence we have presented…  Most importantly, we strongly support the   inspiring investigations and campaigning that so many Guyanese reporters, campaigners, and  experts have undertaken in recent years to  increase accountability around the deals between Guyana’s government and Exxon and other oil companies. It is this work that will hold the powerful to account and Guyanese people should be proud to have such relentless advocates working for them.

Despite Global Witness’s withdrawal of it report on Guyana, most of its concerns contained in the report, including the recommendations made, remain valid. As stated in our article of 24 February 2020, the report confirms what we have been saying all along: (i) the 2016 PSA is overwhelmingly weighted in favour of the U.S. oil giant; (ii) the agreement should be renegotiated to provide Guyana with a better deal; and (iii) while companies exist to maximise shareholders’ wealth, such an approach should be tempered with a social conscience, by not taking advantage of weak negotiation skills, among others, especially for a poor developing country as ours.

We reiterate our previously stated view that Exxon took total and absolute advantage because of our desire not only for it to act as a buffer against the Venezuelan threat to our territorial integrity but also to produce oil in time for the 2020 elections. The oil giant used all possible means to extract the best outcome for itself, and itself alone, without regard for the welfare of the Guyana whose natural resources belong to the citizens of this country and which should be exploited mainly for their benefit. The apparent conflicts of interest involving the Guyanese actors also remain a source of serious concern.

In the final analysis, it is the future generations that will have to pay the price of what happened in relation of the PSA with Exxon as well as other licences granted. When one reflects on the environmental damage that would be caused when the eight billion barrels of oil are extracted and burnt as well as the pittance we are receiving for exploiting our natural resources, it might have been better to leave the oil to where it belongs and focus on developing the Guyanese economy through a programme of diversification. In all of this, one must not also discount the effects of the “resource curse” and the “Dutch disease” as a result from having a mono-product economy, as experienced by some oil-producing countries.

The FMA (Amendment) Act 2021: A negation of a genuine attempt to secure the financial autonomy of constitutional agencies 2 weeks ago

The 2020 Corruption Perceptions Index 1 month ago

Badal promises inquiry into oil and gas contracts if elected