The World Bank yesterday approved US$7.5m ($1.5b) for the Guyana COVID-19 Emergency Response Project to support the country in tackling the current pandemic.

Trawler owners and seafood processors have voiced alarm at reports that the Ministry of Agriculture has issued two new trawling licences in contravention of a years-long agreement to ensure sustainable fishing of seabob and other species.

One of three men charged for the 2014 murder of taxi driver Raphael Campbell was on Tuesday sentenced to 10 years in prison after pleading instead to the lesser offence of manslaughter before Justice Navindra Singh.

The pedestrian who was fatally hit by a truck on the Agricola Public Road as he attempted to cross the four-lane thoroughfare on Monday has been identified as Kevin Monderson.

As hoteliers anticipate an increase in  arrivals brought on by the discovery of oil offshore Guyana, local companies such as King’s Jewellery World and Palm Court have responded to the government’s call for investors to build hotels which aim to provide first-class accommodations.

The developers of the planned US$90 million Hilton Garden Inn, one of four chain-branded hotels expected to be constructed here, have already received the requisite approvals to begin construction, Head of the Guyana Office for Foreign and Local Investment (G-Invest) Peter Ramsaroop has said.

Although they have ceased operations, dredge owners who were illegally mining on Micobie’s titled lands have refused to move from the Lower Potaro River as was instructed by the Guyana Geology and Mines Commission (GGMC).

AUCKLAND, New Zealand, CMC – West Indies Twenty20 International captain Kieron Pollard said his side should use their three-match series against New Zealand, starting tomorrow (2 am – East Caribbean Time) at Eden Park, to improve their results in the format.

Guyana’s local content final report has been completed and was yesterday submitted to government through Minister of Natural Resources, Vickram Bharrat, with Chairman of the Committee, Shyam Nokta, emphasising that the policy will ensure Guyanese capitalize on  the benefits of the bourgeoning oil and gas sector.

Former NICIL acting Chief Executive Officer Colvin Heath-London was released from police custody on Tuesday over a lands probe even as further doubts have been cast on documents that are intended to put him in the clear.

BUENOS AIRES, (Reuters) – Diego Maradona, widely regarded as one of the greatest soccer players of all time before drug and alcohol addiction marred his career, died yesterday at his home in Argentina after suffering a heart attack, his lawyer said.

The police have been  directed to conduct further investigations into the killing of teenager Rockey Sawh, who was allegedly accidentally shot by his friend during a sleepover in Kitty more than a week ago.

Chaos broke out at the Stabroek Market area last evening as the police attempted to arrest an individual and were allegedly attacked by bystanders.

The  second of the three Time Trial events which was scheduled to be staged Sunday in Berbice has been postponed to December 13 due to unforeseen circumstances.

CHRISTCHURCH, New Zealand, CMC – A third test on a group of West Indies players and support staff – including Test captain Jason Holder and Twenty20 International captain Kieron Pollard – currently enduring managed isolation for the COVID-19 virus on the Tour of New Zealand, have all returned negative.

Heavy rainfall in Region Eight continues to delay the re-construction of the bridge at Tiger Creek which collapsed more than three weeks ago.

Dear Editor, In an extensive Brief on Criminal Justice Systems there is an advisory catchphrase which warns that “jailing is failing.”

Stating that the future of the economies of Guyana and Suriname  is intertwined, President Irfaan Ali has urged that advantage be taken of the synergies and complementarities to deepen integration. 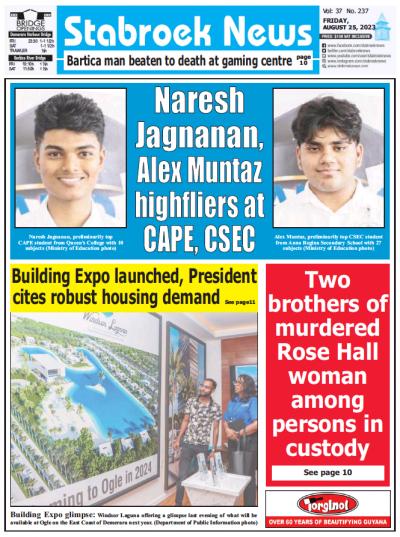